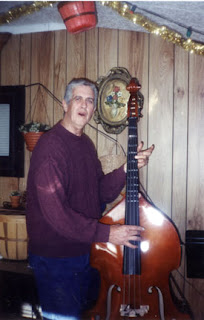 A great voice has gone on to heaven to sing with the angels...George Harvey Fisher, my Daddy, left this world behind on August 20, 2012.  He loved to sing and listen to good music.  He sang lead, tenor and bass and knew how to read music, even shape notes!

He installed a stereo system in our home in Henderson, Nevada, so that we could here the music inside or outside!  He was a member of the SPEBSQSA in high school and won 1 chair bass and the opportunity to go to state!

Daddy sang for weddings, funerals, church specials, at home gathered around the piano, over the phone to his father before he passed away in 1969, on the radio, on road trips, while driving an 18 wheeler across the eastern United States, on a buffalo ranch in Wyoming, for a Senator's luncheon, with his son, daughter and grandsons!

p.s. read more about my Daddy by clicking on the tab entitled "George Harvey Fisher 1937-2012" at the top of this blog!

Artwork Copyright 2007 by Phyllis Mae Richardson Fisher (my mother!)
Posted by Unknown at 10:48 AM No comments: 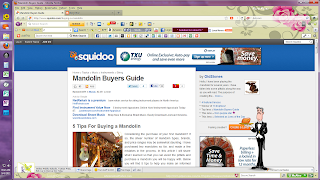 I have for years wanted to play the mandolin! This Squidoo lens (link listed below!) is chock full of useful information to get me or you, started in the right direction. Maybe I will find one under the Christmas tree this year? Making music is a part of my spirit and the memories that I have of play together with my father, brother and sons, will keep me going for a long, long time!!
Mandolin Buyers Guide
Posted by Unknown at 8:51 AM No comments:

Merry Christmas to All!!! 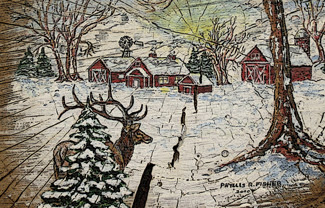 Artwork Copyright 2007 by Phyllis Mae Richardson Fisher (my mother!)
Posted by Unknown at 8:20 AM 1 comment: 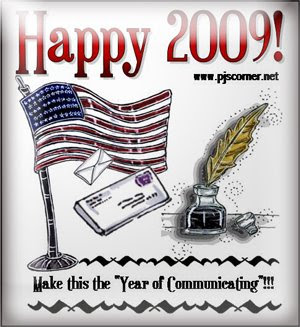 Artwork Copyright 2007 by Phyllis Mae Richardson Fisher (my mother!)
Posted by Unknown at 8:25 PM No comments:

To play a piece of music in the exact tempo that it was written, there are a couple of things you need to look for at the top of the staff. For instance in a piece of music "I Saw Three Ships / Away In a Manger / Sussex Carol by ENGLISH CAROL, JAMES R. MURRAY and TRADITIONAL, the tempo is marked a dotted quarter note is equal to 84. If you have a metronome then slide the weight down the metronome stick until it is in line with 84. The metronome will rock back and forth giving you the perfect rhythm to count out the time to this piece.

If you don't have a traditional metronome you can go online to METRONOME ONLINE and set it!
Posted by Unknown at 7:13 PM 1 comment: 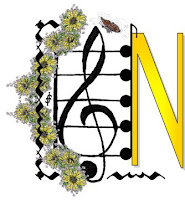 o Other Love, Could Love You More...with Valentine's day just around the corner, I will be concentrating on the Love Songs that we

sing. There were two songs back in the 50's that were titled "No Other Love".

In 1950, Bob Russell wrote the words to a popular song derived from Frederick Chopin's Etude No. 3 in E, Op. 10, and a show tune was written in 1953 by Rodgers and Hammerstein for their musical "Me and Juliet". After looking at the score of Chopin's piece that is pictured with the 1950's love song on Wikipedia, the "No Other Love" that we sing is the 1950 song.

Jo Stafford recorded version of this song hit the Billboard charts at No. 10 in 1950. Our home recorded 1998 version is sung by my father, George Harvey. I do suggest that you turn your volume down before starting this song as it was recorded on a high bias cassette tape and has a resonating quality to it if turned up too loud.

Artwork Copyright 2007 by Phyllis Mae Richardson Fisher
Posted by Unknown at 1:33 AM No comments:

Artwork Copyright 2007 by Phyllis Mae Richardson Fisher (my mother!)
Posted by Unknown at 6:10 PM No comments:

What is your favorite genre?

...the blogvoice that chronicles the songs we sing together. History, memories, lyrics and tidbits about those songs enhance our home recordings.

The songs in our song list were recorded 10 years ago! My sons were only 15 and 16 at the time and music was a big part of their homeschooling. I would like to introduce you to the four regular members of the Fisher Family Singers:

George Harvey ~ the senior member and my dad. He usually sings harmony and plucks the upright bass, however there are several songs were he sings lead. As a young man he was a member of the SPEBSQSA, Society for the Preservation and Encouragement of Barbershop Quartet Singing in America.

Travis Lee ~ my oldest son, sings lead with a Irish tenor sound and strums his acoustic guitar. There are a few songs were he plucks out the harmony using a steel guitar sound with his ROLAND GR-30 Synthesizer.

Anthony Wayne ~ my youngest son, blends his baritone voice with his brothers' and strums his acoustic guitar. He has a wonderful sing songy talking voice when he recites cowboy poetry, too.

Janey Loree ~ myself, who sings lead, harmony and plays the keyboard.

Douglas Wayne ~ as a guest member and my brother, Doug has a rich, vibrato baritone voice and plays the acoustic guitar as well.

Each song link will take you to a new tab where the song will start playing automatically with Quicktime and gives you the option of play the song again. We encourage you to continue reading FFS's blog while the songs are playing! These songs are for singing along with...enjoy!!!

About The Fisher Family Singers

Other Blogs Written by Janey Loree...